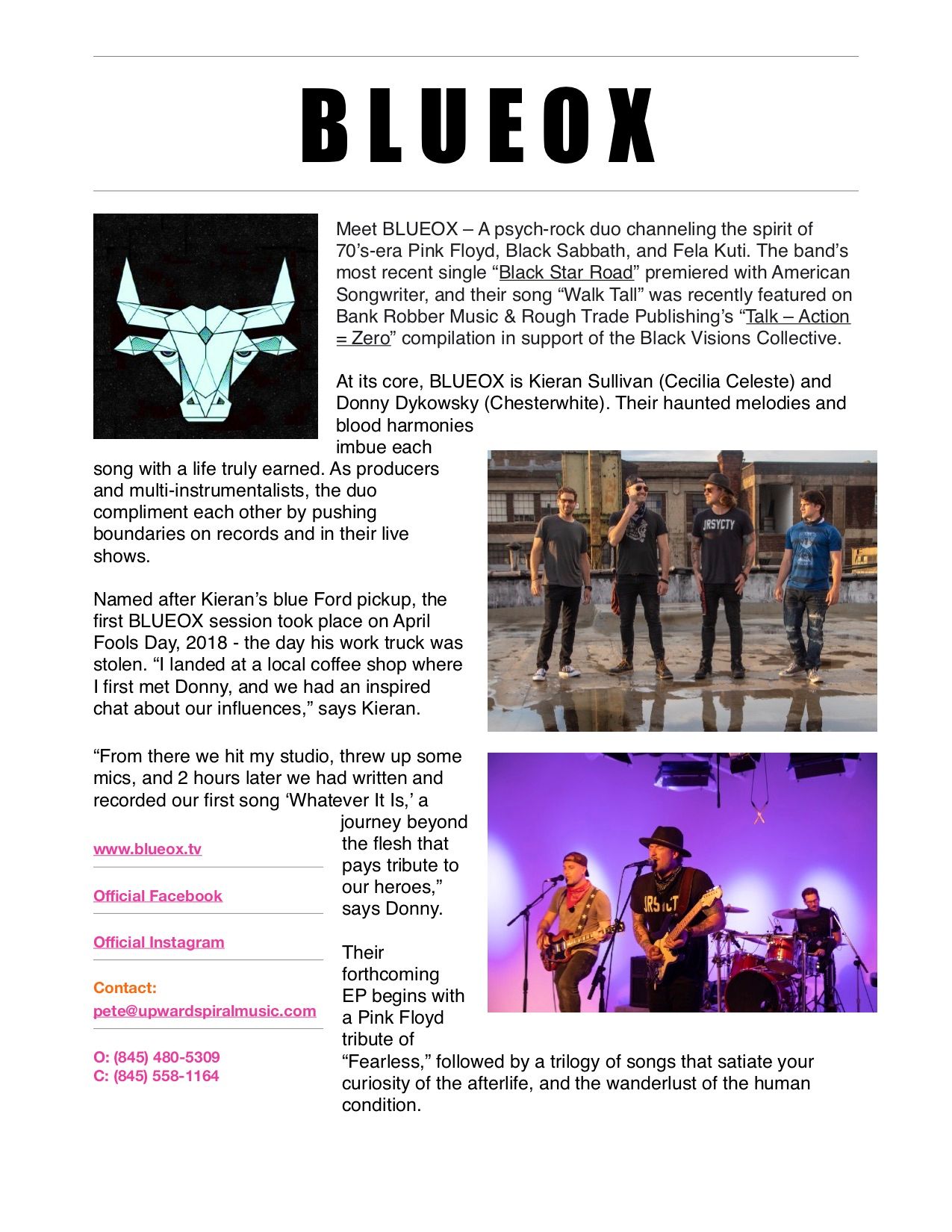 Kieran is a soulful and honest storyteller with a raspy voice and a bluesy swagger.

Kieran Sullivan is a singer/songwriter, multi-instrumentalist and record producer based out of Jersey City, NJ.

He has been touring as a singer-songwriter throughout the US and Europe, and as the front man for up and coming New York City based roots rock reggae jamband CC Roots.

American Songwriter - “Dripping in ’70s psych-rock, BLUEOX tap into something murky and melodic on new single “Black Star Road,” off their upcoming debut EP, out this Summer.”

PROG - “...if someone loved this Pink Floyd song [Fearless] as much as we did, they’d vibe with Blueox”

Variety - Independent artists from around the world will be featured on a new compilation called “Talk – Action = Zero,” which pays tribute to black Americans who have been died due to police brutality.

THE BEAT - “The eclectic tracks that fill their debut album are visceral, melodic and unpredictable. BLUEOX delivers an inspired set of songs that nods to rock's past with fresh eyes”

NJ.com - “a fusion of psychedelia, stoner-rock, and prog … invokes the druggy free-falling rapture of Floyd and the Grateful Dead”

JUXTAPOZ - Fearless Video Premier “All 3,771 frames of the video were created on a single piece of wood, making for a pretty fantastic ride over 6 minutes.”

NEW NOISE - Whatever It Is - “a soulful, psychedelic, and melody-infused debut EP…with haunting melodies and bold lyrics…set the tone for a story-telling concept with themes of light and dark, the afterlife, and beyond.”

ROCK ‘N‘ LOAD - “The original songs on the EP range from visceral and melodic, to raucous and unpredictable, BLUEOX delivers an inspired set of songs that nods to rock’s past with fresh eyes.”

Folk N Rock - “The track felt anthemic, and it had balls” [Walk Tall]

NJ.com - BLUEOX whisks us away to lysergic San Francisco with the trippy, psychedelic “Ten Feet Tall”

"The songs were well written and exhibited excellent musicianship. Sullivan’s vocals aren’t too shabby either!"- Tim Louie, The Aquarium (Aug 11, 2010)


"Sullivan's a supple and inventive guitarist, picking out captivating lead parts on his acoustic, while Soares harmonized on vocals and added sparse but tasty synth chordings to accent the melodies."- Jim Testa, NJ.COM (May 14, 2010)


"The line of fans that went around the corner seemed to grab the attention of some astute members of the NYPD."- Stephen Bailey, Cultural Exchange Advocate (Nov 27, 2010)